Finding patterns in your data

In this tutorial, we will learn to use ordination to explore patterns in multivariate ecological datasets. We will mainly use the vegan package to introduce you to three (unconstrained) ordination techniques: Principal Component Analysis (PCA), Principal Coordinate Analysis (PCoA) and Non-metric Multidimensional Scaling (NMDS).

Make a new script file using File/ New File/ R Script and we are all set to explore the world of ordination. We will use data that are integrated within the packages we are using, so there is no need to download additional files.

Ordination is a collective term for multivariate techniques which summarize a multidimensional dataset in such a way that when it is projected onto a low dimensional space, any intrinsic pattern the data may possess becomes apparent upon visual inspection (Pielou, 1984).

In ecological terms: Ordination summarizes community data (such as species abundance data: samples by species) by producing a low-dimensional ordination space in which similar species and samples are plotted close together, and dissimilar species and samples are placed far apart. Ideally and typically, dimensions of this low dimensional space will represent important and interpretable environmental gradients.

Generally, ordination techniques are used in ecology to describe relationships between species composition patterns and the underlying environmental gradients (e.g. what environmental variables structure the community?). Two very important advantages of ordination is that 1) we can determine the relative importance of different gradients and 2) the graphical results from most techniques often lead to ready and intuitive interpretations of species-environment relationships.

To give you an idea about what to expect from this ordination course today, we’ll run the following code. 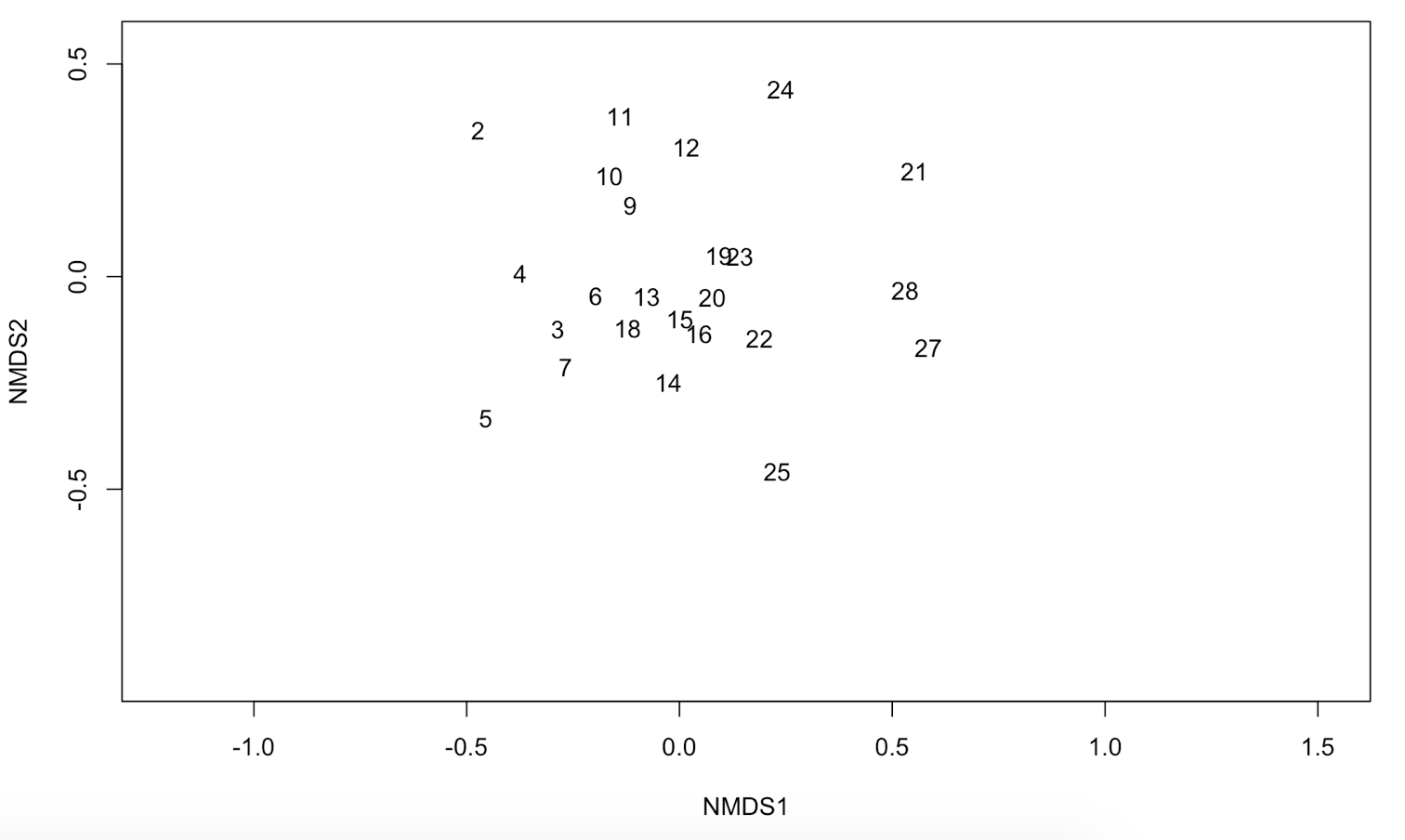 It is now a lot easier to interpret your data. Can you see which samples have a similar species composition?

In this tutorial, we only focus on unconstrained ordination or indirect gradient analysis. This ordination goes in two steps. First, we will perfom an ordination on a species abundance matrix. Then we will use environmental data (samples by environmental variables) to interpret the gradients that were uncovered by the ordination. The final result will look like this: 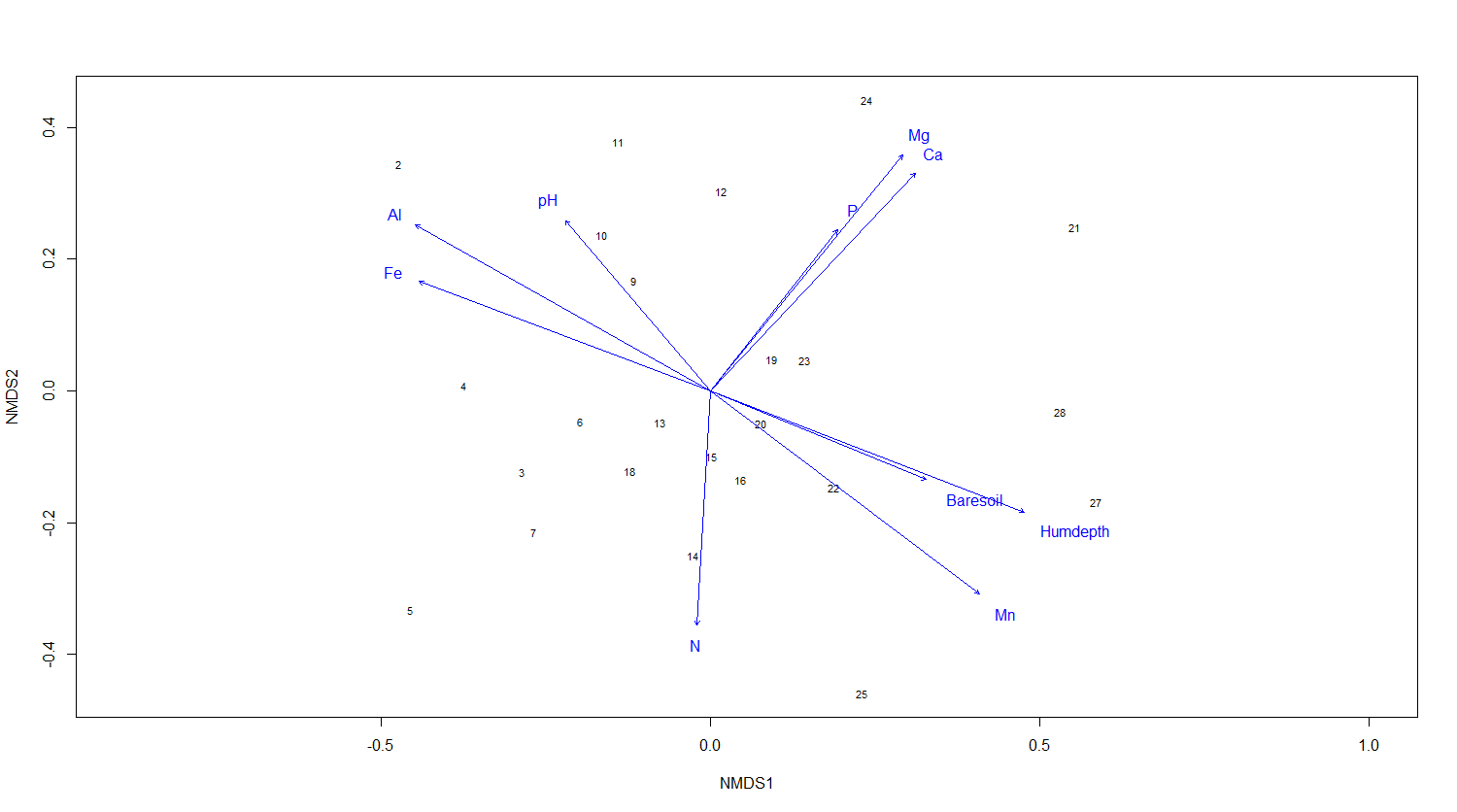 Ordination and classification (or clustering) are the two main classes of multivariate methods that community ecologists employ. To some degree, these two approaches are complementary. Classification, or putting samples into (perhaps hierarchical) classes, is often useful when one wishes to assign names to, or to map, ecological communities. However, given the continuous nature of communities, ordination can be considered a more natural approach. Ordination aims at arranging samples or species continuously along gradients.

If you want to know how to do a classification, please check out our Intro to data clustering.

In this section you will learn more about how and when to use the three main (unconstrained) ordination techniques:

PCA uses a rotation of the original axes to derive new axes, which maximize the variance in the data set. In 2D, this looks as follows:

Computationally, PCA is an eigenanalysis. The most important consequences of this are:

In most applications of PCA, variables are often measured in different units. For example, PCA of environmental data may include pH, soil moisture content, soil nitrogen, temperature and so on. For such data, the data must be standardized to zero mean and unit variance. For ordination of ecological communities, however, all species are measured in the same units, and the data do not need to be standardized.

Try to display both species and sites with points. This should look like this: 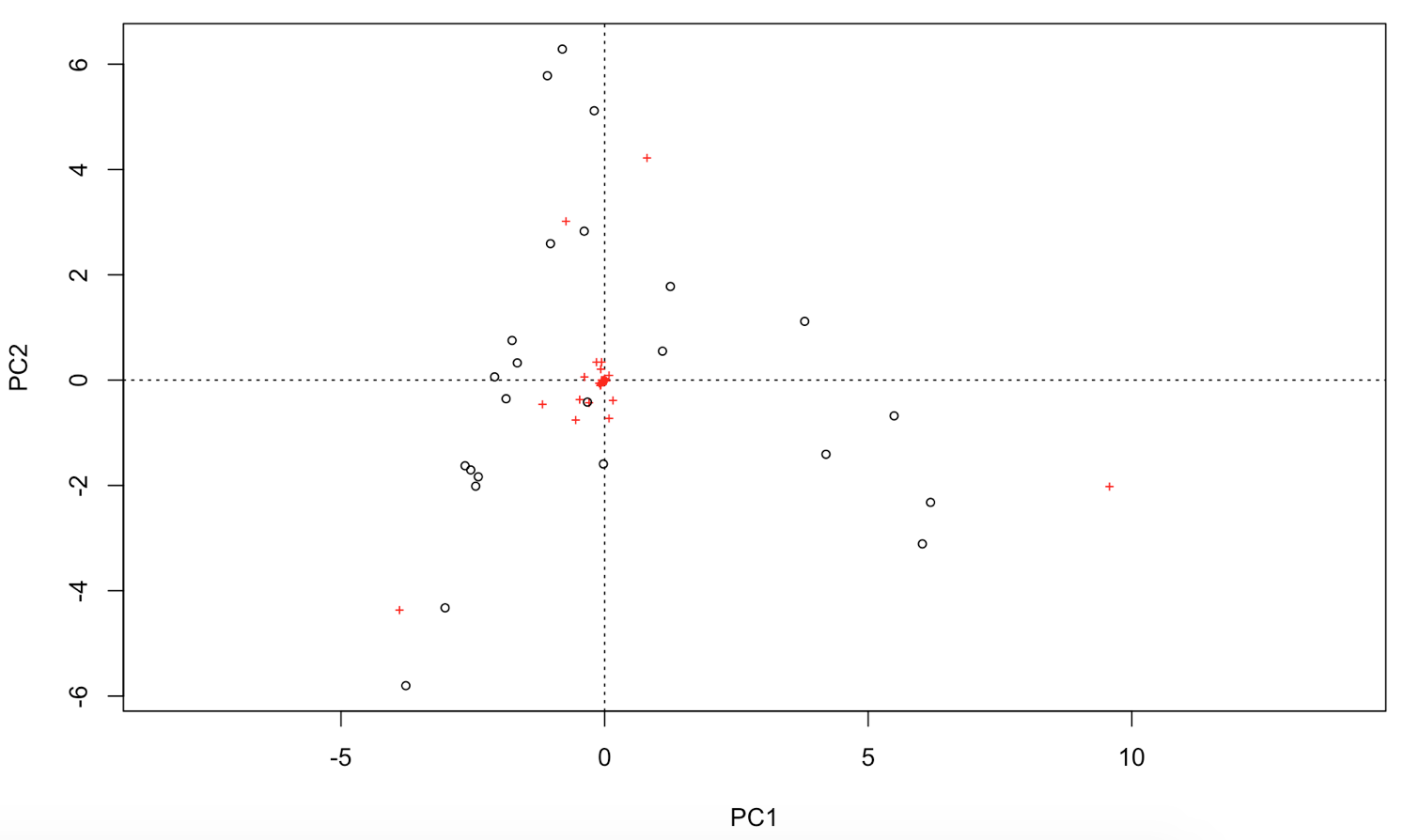 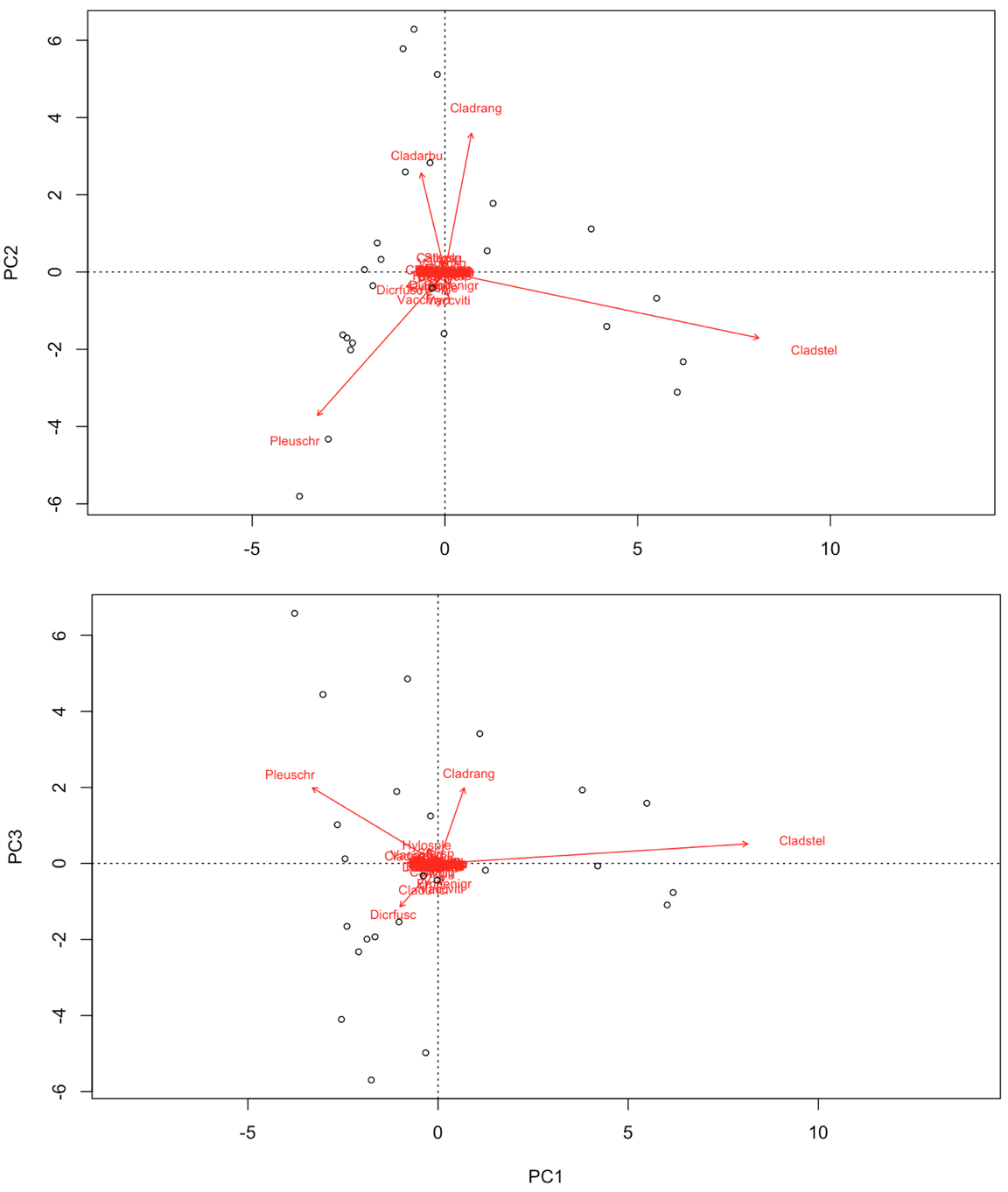 In contrast to some of the other ordination techniques, species are represented by arrows. This implies that the abundance of the species is continuously increasing in the direction of the arrow, and decreasing in the opposite direction. Thus PCA is a linear method. PCA is extremely useful when we expect species to be linearly (or even monotonically) related to each other. Unfortunately, we rarely encounter such a situation in nature. It is much more likely that species have a unimodal species response curve: 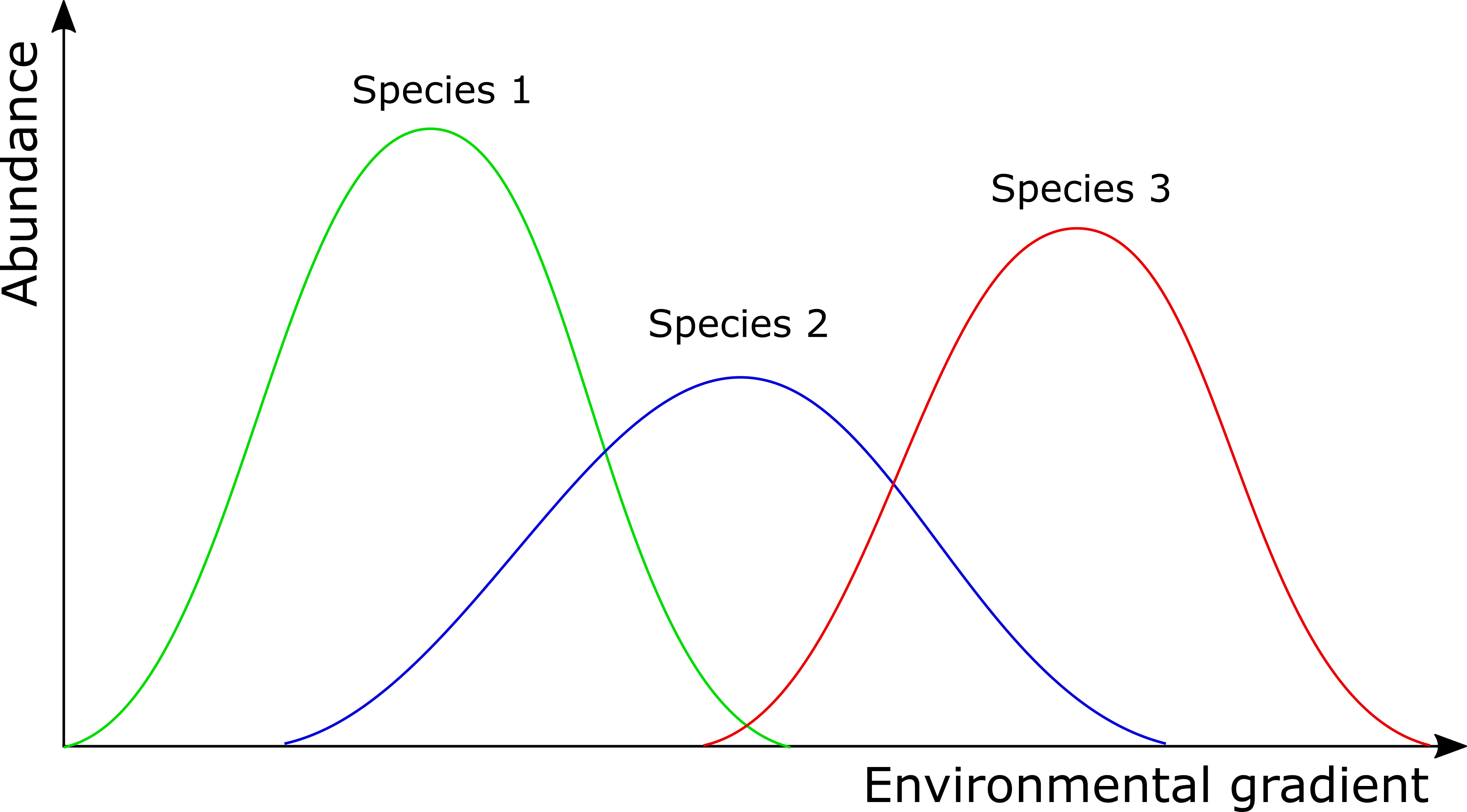 Unfortunately, this linear assumption causes PCA to suffer from a serious problem, the horseshoe or arch effect, which makes it unsuitable for most ecological datasets. The PCA solution is often distorted into a horseshoe/arch shape (with the toe either up or down) if beta diversity is moderate to high. The horseshoe can appear even if there is an important secondary gradient. Can you detect a horseshoe shape in the biplot?

The first step of a PCoA is the construction of a (dis)similarity matrix. While PCA is based on Euclidean distances, PCoA can handle (dis)similarity matrices calculated from quantitative, semi-quantitative, qualitative, and mixed variables. As always, the choice of (dis)similarity measure is critical and must be suitable to the data in question. If you want to know more about distance measures, please check out our Intro to data clustering. For abundance data, Bray-Curtis distance is often recommended. You can use Jaccard index for presence/absence data. When the distance metric is Euclidean, PCoA is equivalent to Principal Components Analysis. Although PCoA is based on a (dis)similarity matrix, the solution can be found by eigenanalysis. The interpretation of the results is the same as with PCA. 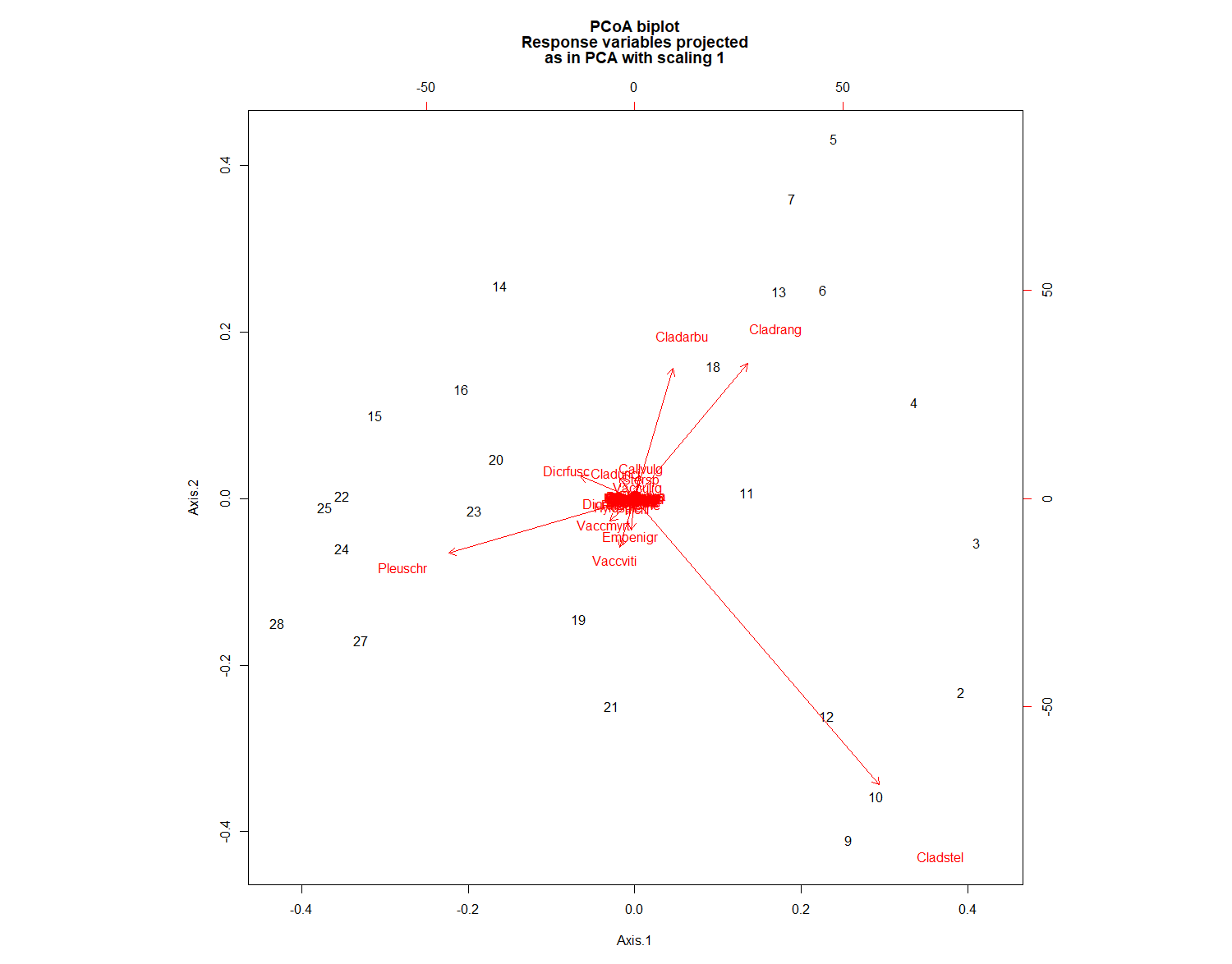 PCoA suffers from a number of flaws, in particular the arch effect (see PCA for more information). These flaws stem, in part, from the fact that PCoA maximizes a linear correlation. Non-metric Multidimensional Scaling (NMDS) rectifies this by maximizing the rank order correlation.

NMDS attempts to represent the pairwise dissimilarity between objects in a low-dimensional space. Any dissimilarity coefficient or distance measure may be used to build the distance matrix used as input. __NMDS is a rank-based approach.__ This means that the original distance data is substituted with ranks. Thus, rather than object A being 2.1 units distant from object B and 4.4 units distant from object C, object C is the “first” most distant from object A while object C is the “second” most distant. While information about the magnitude of distances is lost, rank-based methods are generally more robust to data which do not have an identifiable distribution.

NMDS is an iterative algorithm. NMDS routines often begin by random placement of data objects in ordination space. The algorithm then begins to refine this placement by an iterative process, attempting to find an ordination in which ordinated object distances closely match the order of object dissimilarities in the original distance matrix. The stress value reflects how well the ordination summarizes the observed distances among the samples.

NMDS is not an eigenanalysis. This has three important consequences:

There is no unique solution. The end solution depends on the random placement of the objects in the first step. Running the NMDS algorithm multiple times to ensure that the ordination is stable is necessary, as any one run may get “trapped” in local optima which are not representative of true distances. Note: this automatically done with the metaMDS() in vegan.

Axes are not ordered in NMDS. metaMDS() in vegan automatically rotates the final result of the NMDS using PCA to make axis 1 correspond to the greatest variance among the NMDS sample points. This doesn’t change the interpretation, cannot be modified, and is a good idea, but you should be aware of it.

A plot of stress (a measure of goodness-of-fit) vs. dimensionality can be used to assess the proper choice of dimensions. The stress values themselves can be used as an indicator. Stress values >0.2 are generally poor and potentially uninterpretable, whereas values <0.1 are good and <0.05 are excellent, leaving little danger of misinterpretation. Stress values between 0.1 and 0.2 are useable but some of the distances will be misleading. Finding the inflexion point can instruct the selection of a minimum number of dimensions. 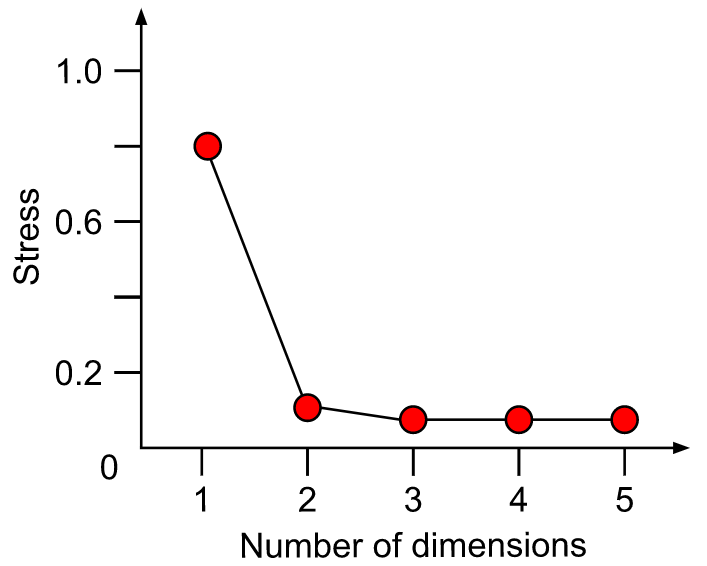 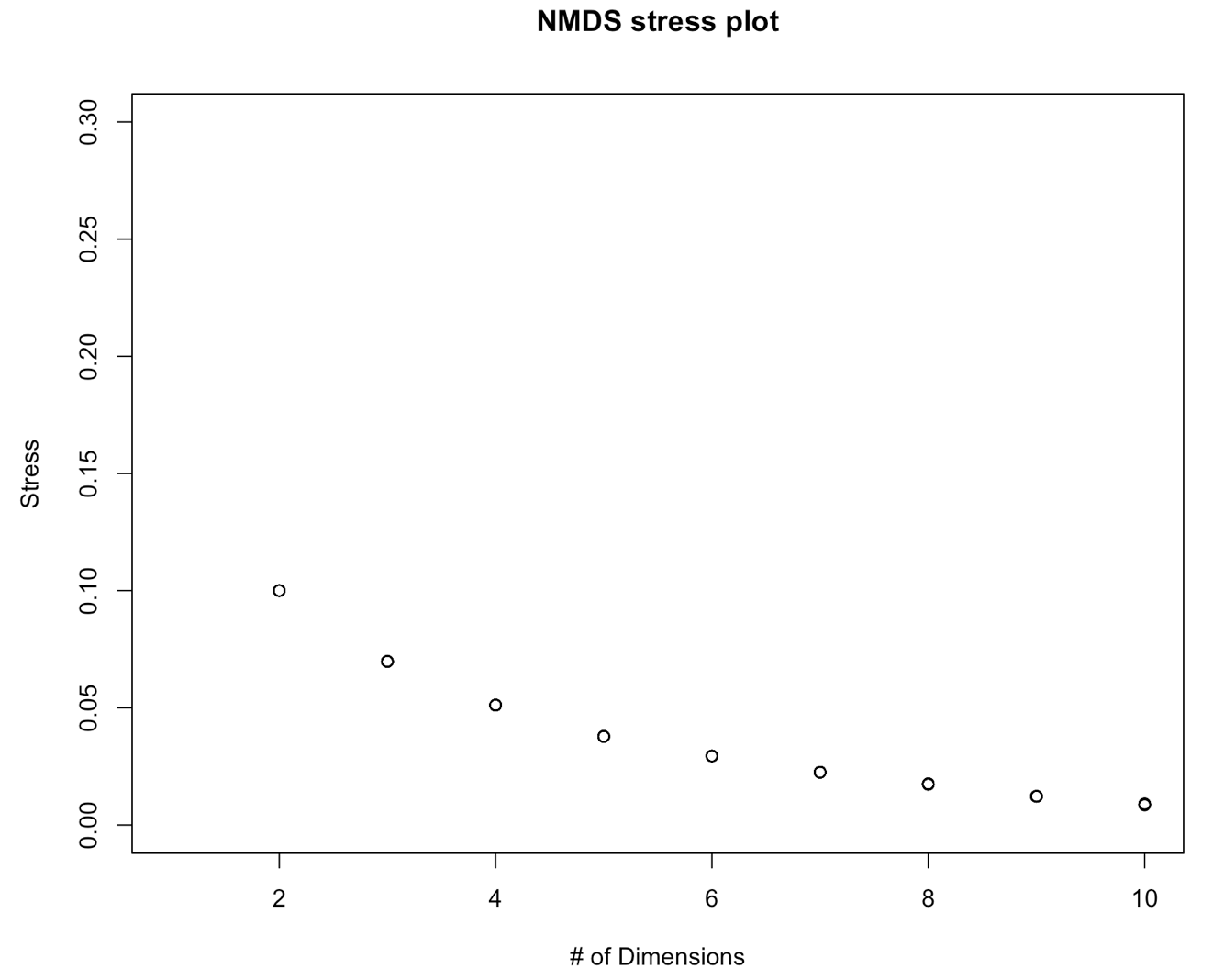 On this graph, we don´t see a data point for 1 dimension. Do you know what happened? Tip: Run a NMDS (with the function metaNMDS() with one dimension to find out what’s wrong. Then adapt the function above to fix this problem.

The results are not the same! Can you see the reason why? metaMDS() has indeed calculated the Bray-Curtis distances, but first applied a square root transformation on the community matrix. Check the help file for metaNMDS() and try to adapt the function for NMDS2, so that the automatic transformation is turned off.

Let’s check the results of NMDS1 with a stressplot 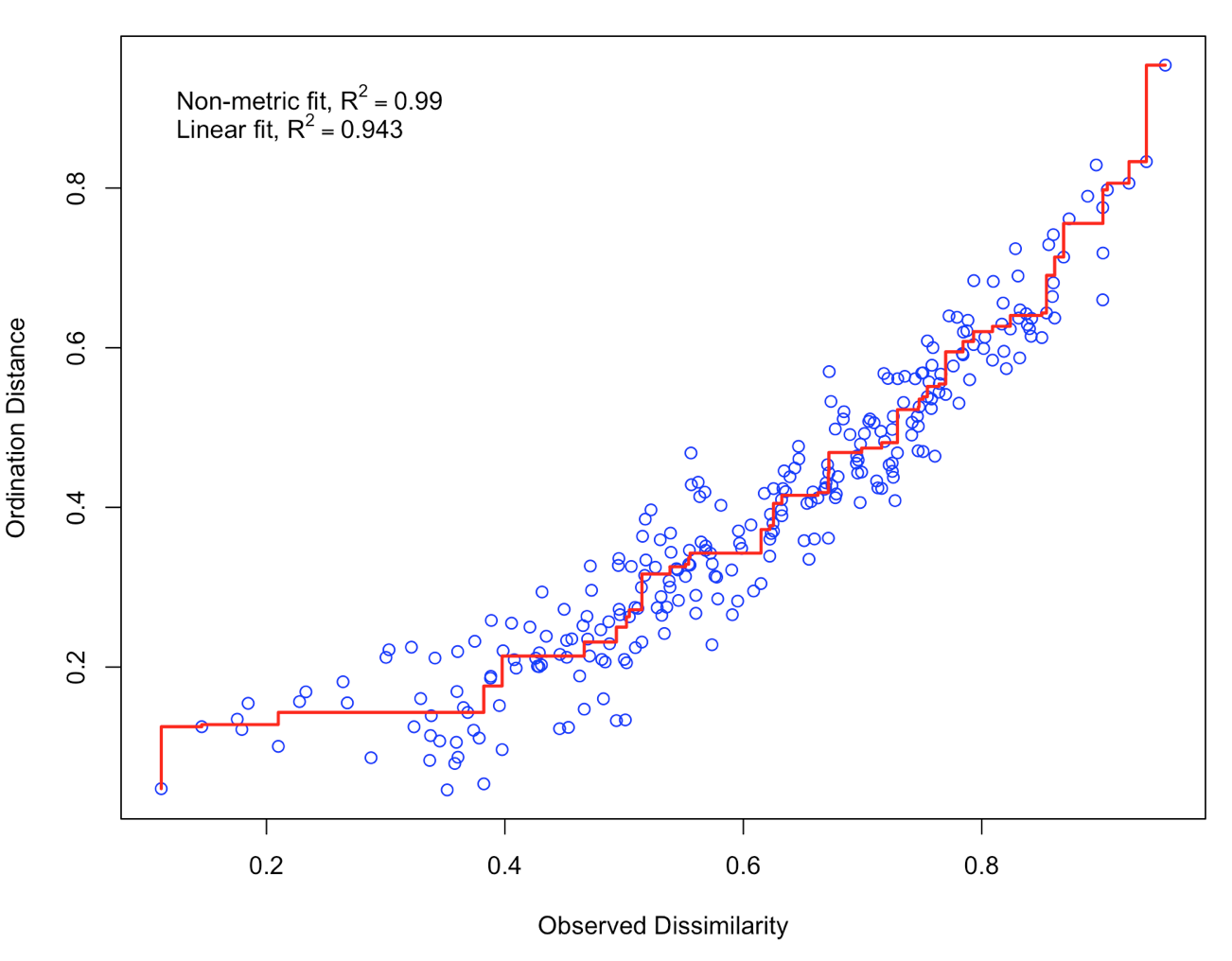 There is a good non-metric fit between observed dissimilarities (in our distance matrix) and the distances in ordination space. Also the stress of our final result was ok (do you know how much the stress is?). So we can go further and plot the results:

There are no species scores (same problem as we encountered with PCoA). We can work around this problem, by giving metaMDS the original community matrix as input and specifying the distance measure. 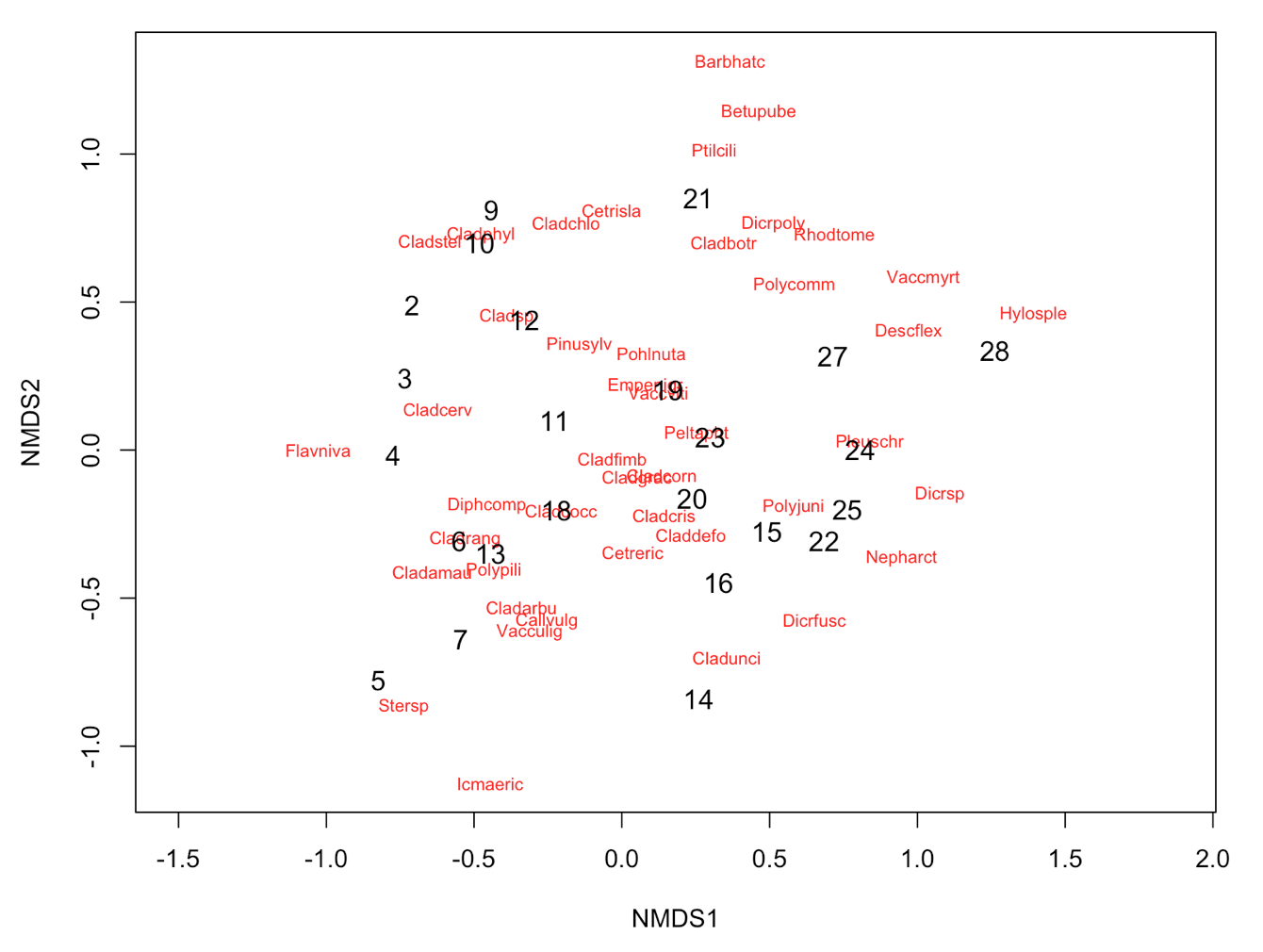 3. Interpretation of the results 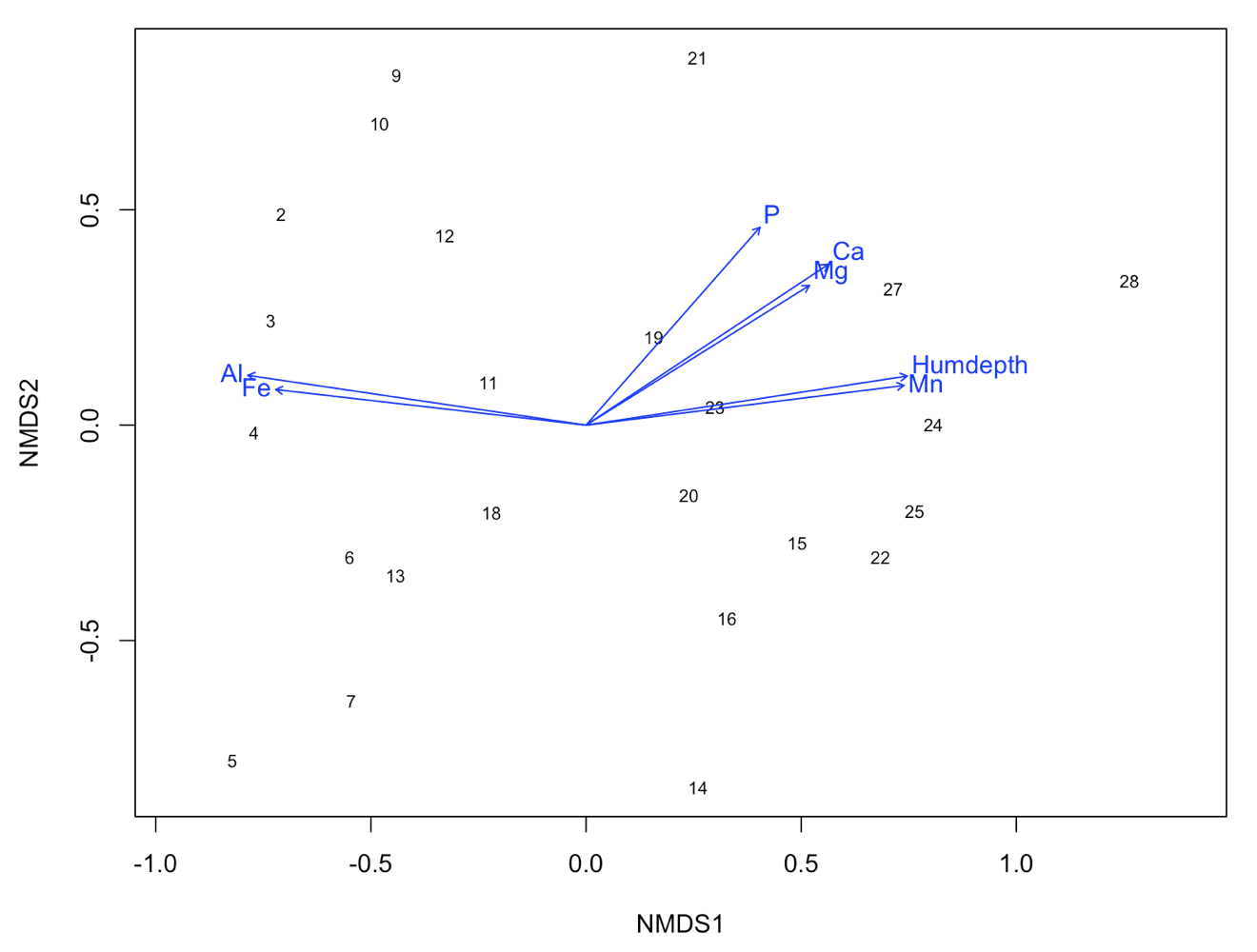 It´s easy as that. Next, let’s say that the we have two groups of samples. This could be the result of a classification or just two predefined groups (e.g. old versus young forests or two treatments). Now, we want to see the two groups on the ordination plot. Here is how you do it: 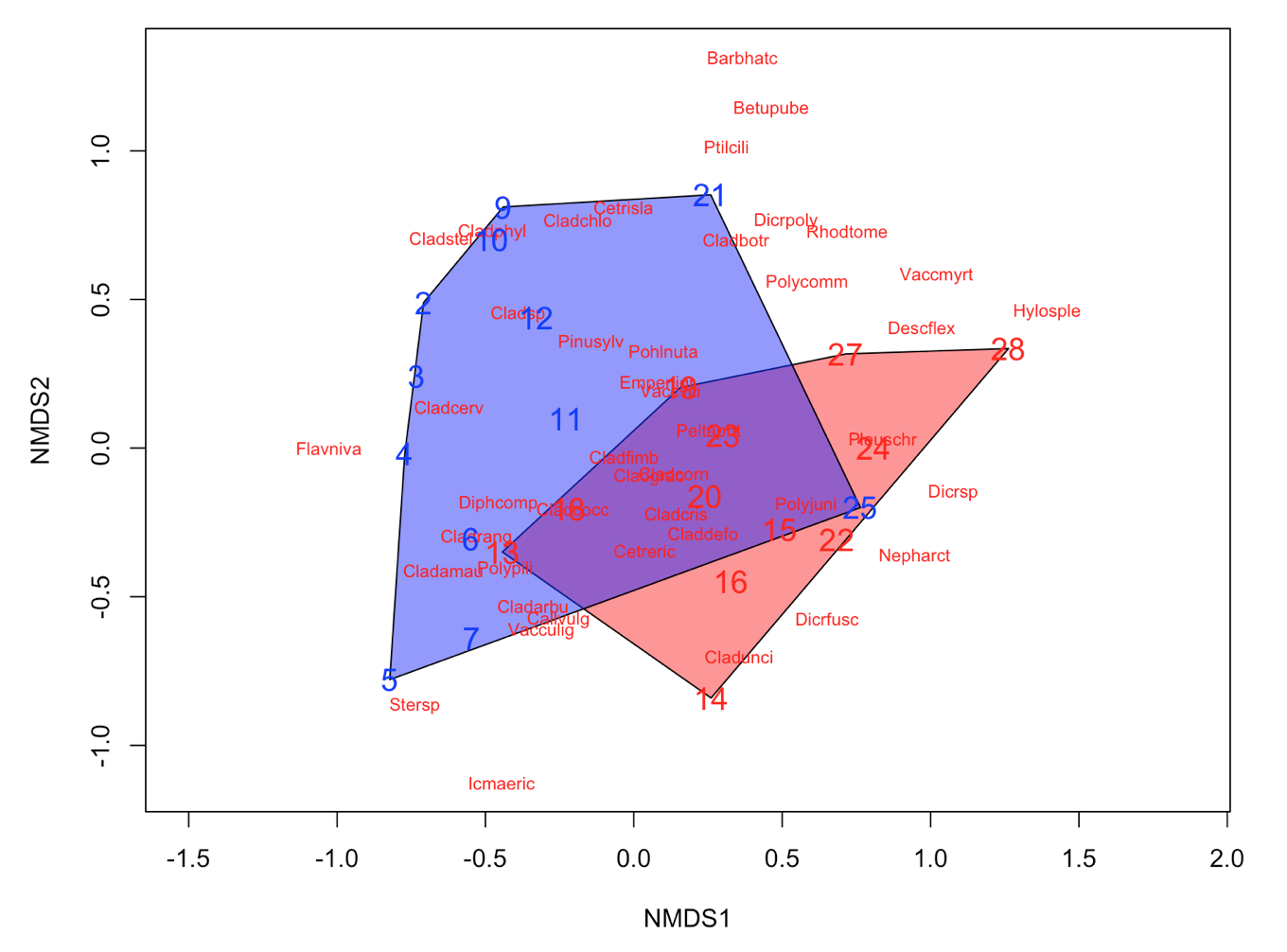 Congratulations! You´ve made it to the end of the tutorial! Now you can put your new knowledge into practice with a couple of challenges.

Perform an ordination analysis on the dune dataset (use data(dune) to import) provided by the vegan package. Interpret your results using the environmental variables from dune.env.

Doing this tutorial as part of our Data Science for Ecologists and Environmental Scientists online course?

This tutorial is part of the Stats from Scratch stream from our online course. Go to the stream page to find out about the other tutorials part of this stream!

If you have already signed up for our course and you are ready to take the quiz, go to our quiz centre. Note that you need to sign up first before you can take the quiz. If you haven't heard about the course before and want to learn more about it, check out the course page.